‘A touch of glamour that befits a Star…’

The E series model had sold well, with 344,386 examples leaving the factory between Autumn 1951 and the end of 1956 by which time planning for the replacement was well advanced, and indeed testing of the prototype had already started. The new concept was a move away from the single body style with differing power trains to two distinct models. The 6 cylinder E series model was to be replaced by the PA model and the four cylinder Wyvern was to be replaced by the new smaller four-cylinder car, the F Type, later to be given the name Victor.

Edward Riley of GM Overseas suggested a weight target for the F Type of 1900 lb, which was 500 lb lighter than the Wyvern and even slightly lighter than the then current Opel Rekord two door saloon. David Jones and his styling team in Luton produced two different designs, one which was typical mid ’50’s Americana’, and another which was simple in line but was not particularly good looking either. Despite this, full size ‘clays’ were produced of both. By this time Howard ‘Red’ Curtice was president of General Motors. He was a man known for his on the spot decisions and forthright views, but by the same token understood the demands placed on the designers in terms of cost balanced by quality demanded by the buying public and summed this up in the mid 1950’s when he said ‘you can take the value out so much more rapidly than you take the cost out.’

Soon after his appointment, a tour of GM European plants by Curtice took place in September 1954 including a trip to the Luton plant. This was the time of the panoramic windscreen in America and it was decided that all GM divisions were to use this feature, followed by all overseas divisions. All the GM US manufacturers had to comply, including Packard previously regarded for the understated appearance of its cars, resulting in the change in style for their 1955 models.

David Jones’ American looking clay representation of the new F Type therefore featured a panoramic windscreen, along with other styling details in line with Harley Earl’s styles of the time. Harley Earl was GM’s chief stylist for 31 years and was the first to introduce the concept of clay modeling to Detroit and was considered to be the Father of Modern Design in Mass Production being responsible for more than half of GM’s greatest 20th Century milestones. Despite this one of David Jones’ more conservative team members view of the design was that it reflected ‘ the extravagances of that unfortunate ‘juke-box’ period in American styling in which Vauxhalls traditional flutes had been relegated to the body sides in the form of concave spears, but that the other design was notably simple and far from glamorous’

On his visit to the styling department at Kimpton Road Curtice reviewed and examined both designs, and the conclusion was in no doubt. His view was that Vauxhall would gain a real lead in the market by being the first manufacturer in Europe to put a car with a panoramic windscreen into mass production, and despite counter arguments from some engineers around the complexity of the design creating a ‘knee cracking’ dog leg at the bottom corners of the windscreen pillars he maintained his opinion that sales advantages were such that there was no other option.

Curtice decided to put some of the design work of the F Type into the hands of Fisher Body in Detroit, a company that GM had acquired in 1926, first suggesting some detail changes. The reason behind the work sharing was the short lead time to production. It is also around this time it is rumoured that the original clays were shipped to Detroit for detail changes and broke in the process of repair leading to a far greater American appearance of the final vehicle than Jones and even Curtice had envisaged. 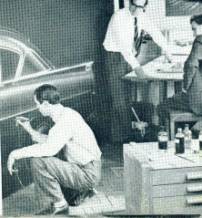 The new PA model, the design of which was entirely ‘in house’ at Vauxhall was due to enter production by the autumn of 1957. This required the employment of extra staff as time was at a premium. Fortunately Fisher Body had time to devote to the F Type owing to a lull in the American programme. Vauxhall engineering staff received help in engineering planning and preparation from Peter Hoglund who came to Luton from Opel. For a number of years Hoglund was Riley’s second in command across Europe, and was well liked and noted for his level headed approach.

Between the start of the F Type planning process and the Launch of the Victor engineering staff increased by 60%, and on 14 December 1954 the co-operative plan for the F Type was launched.

As the Victor programme gained momentum, some Luton based engineers went to work in Detroit on the project. The first prototype was finished in Detroit and ran for the first time on 13th October 1955. With engineering work progressing on this model at full speed, David Jones’ styling team had been busy designing the body of the PA model. On 14th October 1955 Curtice paid his second visit to Luton to view the styling model that Jones had prepared. Curtice declared the new design a winner and announced that the production date for the Victor would be advanced to the spring of 1957.

By March 1956 Maurice Platt, (Vauxhalls Chief Engineer since the end of World War 2, and author of the book ‘Vauxhall Engineering Leadership’) had examined the Victor prototype, now stripped to its component parts after completing a night and day 25,000 miles test for durability at both GM’s proving grounds in Michigan, and on roads in America and Europe in disguise. Apart from sealing problems around the doors the design had stood up well, and Fisher engineers were quickly able to design a new seal to overcome the one apparent problem.

The Luton plant had seen a massive development and enlargement programme during the planning phase that included the installation of the largest chroming plant in Europe. Between 1955 and 1957 Vauxhall spent £36 million to double car production capacity. This involved the excavation of one and a half million tons of chalk and clay leaving a white plain as large as 12 football pitches, ready for the erection of a 1,600,000 sq ft building. The spoil from the site extended Luton Airport by 12 acres, reclaimed 32 acres of marsh in Luton Hoo Park, and contoured for easier ploughing 32 acres of undulating pasture in Lea Valley. 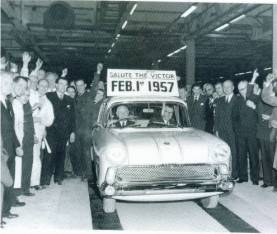 The Victor production line at Luton started on 1st February 1957 with the first car driven off being a right hand drive Super model in Shantung Beige. 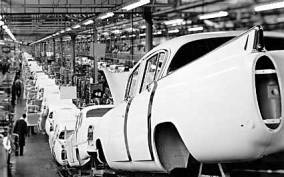 There remains only one survivor of the first day of production, with chassis number 1063, in Laurel Green and registered TDD904 which would have been delivered to its first owner with a set of gold keys that accompanied all first day production Victors. 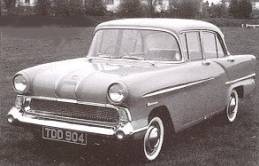 The launch to the press and all UK and overseas dealers took place on 7th February 1957 at the Gaumont State Theatre in Kilburn, which was a big screen cinema-cum- variety theatre in North London where facilities left a little to be desired. The planned electric turntable did not materialise, so a light weight wooden one had to be hired from Jack Hylton’s Orchestra and modified. Even so the engine and gearbox of the Gypsy Red Victor used in the reveal had to be removed to prevent it from crashing through the turntable. Inside the drum, a sweating Vauxhall employee rotated the car by hand, cued by a publicity man with a flash light as the band of the Grenadier Guards played a specially composed march entitled Victor – King of the Highway.

The occasion was hosted by big hearted comedian Arthur Askey, cracking jokes about his chesty ‘dumb blonde’ assistant Sabrina, which the simultaneous translators provided for European dealers failed to render adequately into French German or Swedish. Two cars were actually used on stage, one on the turntable, the other driven on by Dick Early, Vauxhall’s General Sales Manager. The audience included 2000 dealers from 26 countries flown in specially, with press from 10 countries.

Colour was an important part of the Victors specification, with the spectrum available including Gypsy Red, Shantung Beige, Horizon Blue, Harvest Yellow, Laurel Green, Charcoal Grey and Empress Blue. When it came to Black the advertising team had run out of adjectives.

To underline the choice of colour schemes, West End fashion designer Charles Judd produced sixteen special dresses in the various options that were paraded across the stage of the theatre by pretty girls.

The F Type was the looks of tomorrow, bound to make owners the envy of their neighbours yet available at a bargain price of £485 for the basic model. The launch event was reported in Vauxhall Motorist magazine of March / April 1957 as follows:

..’a car that is eager under your hands, yet asks little of your pocket. This is the smaller Vauxhall that people all over the world have been waiting for, the answer to the conjecture of years. This is the car that all others of its class will in future be judged. When the curtain fell at the Gaumont Theatre on the morning of 7th February, a huge audience that included Vauxhall dealers from all over the world knew that they had seen a piece of motoring history in the making. They had watched the introduction to the world of the new Vauxhall Victor. They had seen it make its bow as a star of the first theatrical production of a new car ever staged in Europe. For two and a half hours they applauded as a cast of over 100 (ranging from Arthur Askey to the Band of the Grenadier Guards) introduced the Victor in a specially written musical show produced by Ralph Reader of Gang Show fame….’

The new look was not universally popular particularly on the Super model which had extra embellishments including the famous exhaust pipe concealed within the right hand rear bumper corner. The Autocar sneered…. ‘Several styling features, inside and out, suggest American practice of a year or two ago…The car is sensitive to colour scheme; in black it is quite self-effacing….Anyone who is distracted by flashy pieces of metal around him will prefer the standard car…’ 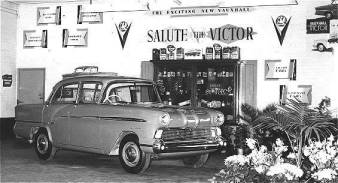 Try-a-Ride from a Vauxhall Showroom

Vauxhall countered this with a five week Try-a-Ride competition, claimed to be the first national contest sponsored by a motor manufacturer in which a car was first prize. The rules were simple – competitors had to take a test drive in a Victor at a franchised dealer and select four colours and four features that gave the Victor Super the greatest appeal. The competition was a great success with 75,000 test drives booked and 58,000 entries submitted, swamping the Luton sorting office. The new Victor was won by a motorist from Chipping Sodbury.

In a little over 15 months from the launch the 100,000th Victor had rolled off the production lines at Luton, and the 250,000th on 7th December 1959. The Victor was destined to become Britain’s largest export vehicle of its time with a total production run of approximately 380,000.